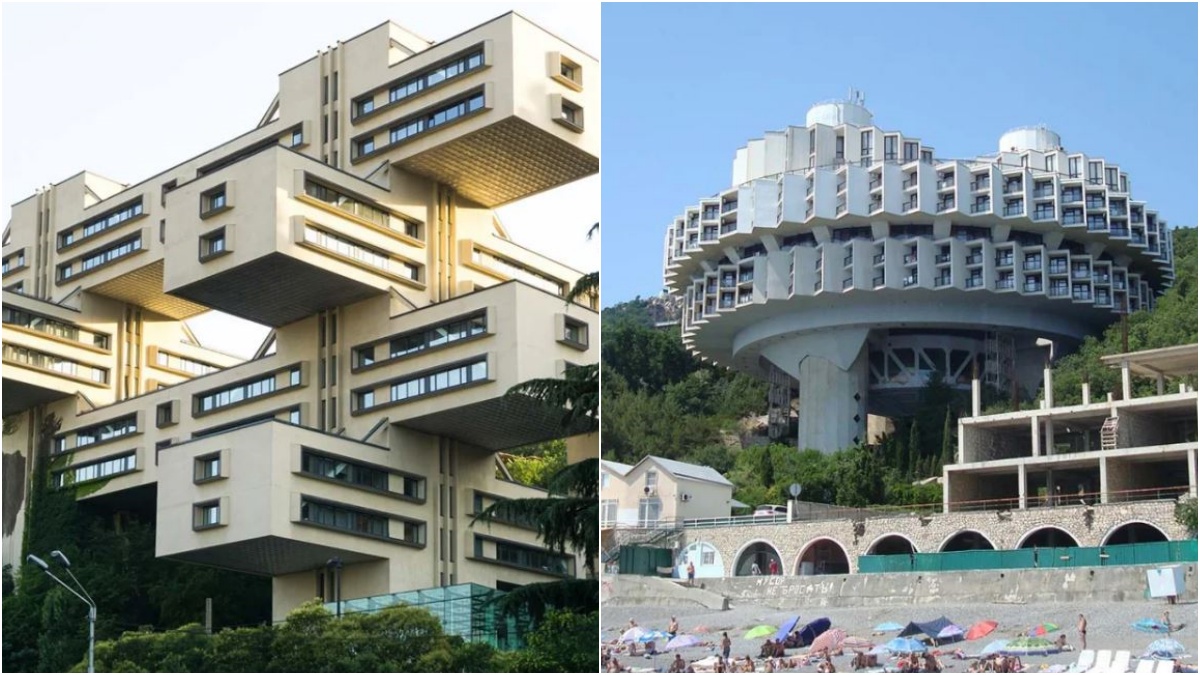 Brutalism was one of the most influential architectural movements of the 20th century. Characterized by raw concrete, large-scale forms, and textured surfaces, brutalist architecture was adopted by architects in most parts of the world at the time. However, there was one region of particular interest, namely the Soviet Union. Many former Soviet cities, from Riga in Latvia to Vladivostok in eastern Russia, still bear traces of this architectural trend. Although these structures, also known as Khrushchev or Brezhnevka, are considered by some to be a sad legacy of the communist era, some rather unique and even strange artifacts can be seen inside. Here is Soviet brutal architecture and its most striking examples…

What is brutalist architecture?

In brutalist buildings, building materials are often used bare rather than decorative. Angular geometric shapes, exposed and usually unpainted concrete are the most characteristic features of this movement. At the same time, the use of a single color throughout the building is a common feature of almost all Brutalist buildings.

Brutalism, which remained popular until the 1970s, was mainly used in the construction of universities, libraries, courthouses, and city halls. The trend, which attracted attention in many parts of the world from England to France, from Eastern Europe to America, was largely taken over by the Soviet Union.

By the 1970s, he lost his popularity due to the fact that he was associated with totalitarianism and was considered soulless by people. Let’s take a look at those unique structures that were built during the Soviet Union and bear traces of brutal architecture…

This building, opened in 1975, is one of the most iconic Soviet structures in Tbilisi, the capital of Georgia. Although it was opened to serve the Ministry of Roads, since 2007 it has been the main center of the Georgian Bank.

This UFO-like structure is a sanatorium built in Yalta in 1985. In Moscow at that time, hundreds of such sanatoriums were built throughout the USSR so that the sick could rest and be treated. Many buildings built at that time as sanatoriums, including Kurpaty, still function today.

The Institute of Robotics and Technical Cybernetics is one of the largest and most important scientific centers in Russia. The building, which symbolizes the many achievements during the space race, is also presented among the best examples of brutalist architecture.

State Museum of the History of Uzbekistan, Tashkent/Uzbekistan

Soviet architecture sometimes also used local styles to create unique brutalist structures. This was especially common in the Central Asian republics, which regularly used intricate patterns and bright colors in their architecture. The State Museum of the History of Uzbekistan, built in 1970, is a good example of this.

The Chisinau circus, opened in 1982, was the largest entertainment establishment in Moldova. The collapse of the USSR and the economic crisis that followed made this building unusable between 2004 and 2014. Today, after a long restoration, some of its parts are put into operation.

One of the clearest examples of brutalism, the Crematorium is located in the Memory Park in Kyiv, the capital of Ukraine. Built in 1982, the building is believed to have been used by the Nazis to cremate Jewish bodies.

This monumental concrete structure was designed for the 1980 Olympic Games. This task fell to Tallinn, modern-day Estonia, since there was no suitable place for sailing in Moscow. The building, which was later used as a concert venue, still has a helipad and a small port.

Palace of Concerts and Sports, Vilnius/Lithuania

Vilnius Palace of Concerts and Sports, built in 1971, is one of the most famous examples of brutalist architecture. The palace again held a public funeral for 13 Lithuanians killed by Soviet troops during the struggle for independence in 1991. The future of the building, abandoned since 2004, is still uncertain.

The building of the House of Soviets is located in the very center of the city of Kaliningrad. The construction of this building, which is one of the most important examples of Brutalism, was started in 1970, but in 1985 its construction was stopped due to budget problems.

From Cathedrals to Literary Works: 11 Projects Started Centuries ago but Still Unfinished

Zvartnots Airport was opened by the communist authorities in 1961, but its iconic part “Terminal 1” was built in 1980. For many years, the airport was home to high-ranking Kremlin officials and represented the pinnacle of luxury in the late Soviet era.

10 buildings recognized as the best examples of modern architecture