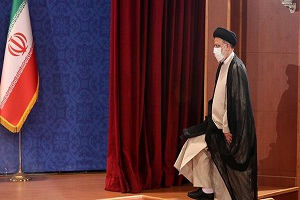 Iranian President Ibrahim Reisi spoke about the tension in his country and said that the protests should be heeded.

According to the official Iranian news agency IRNA, the students were addressed by the President of the Republic, who was present at the program held at the University of Tehran on the occasion of the University Student’s Day.

Responding to the slogans “Down with the dictator” against Iranian leader Ali Khamenei at the Mahs Emini demonstrations that have been going on in the country for about 3 months, Reisi said: “Today they say, dictator, who is a dictator? The United States certainly does not want a strong Iran. They need an Iran like Afghanistan, Syria and Libya, which they have occupied. Iran is different from these countries. The Iranian people will not give the United States the opportunity to carry out this plot.” made a statement.

Stating that there is a difference between protest and riot, Reisy said: “Protest is constructive, riot is destructive. The protests must be heard.” said.

The leader argued that inflation would decrease in Iran and the situation of the people would change.

The death on September 16 of 22-year-old Mahsa Emini, who fell ill and was taken to hospital after being detained on September 13 by Irshad patrols known as the “vice police” in Tehran, sparked protests against the government.

Hundreds of people died during demonstrations that swept the whole country, more than 10 thousand people were detained.

Roughly four months after Prime Minister Mohammad Mosaddegh, who led the oil nationalization movement in Iran, was overthrown in a 1953 coup by the US Central Intelligence Agency (CIA), Richard Nixon, deputy to then US President Dwight Eisenhower, supported the support of his country to Mohammad Reza Shah. He visited Tehran on December 7, 1953 to show

In connection with this event, on December 7, Iran annually celebrates University Student Day.