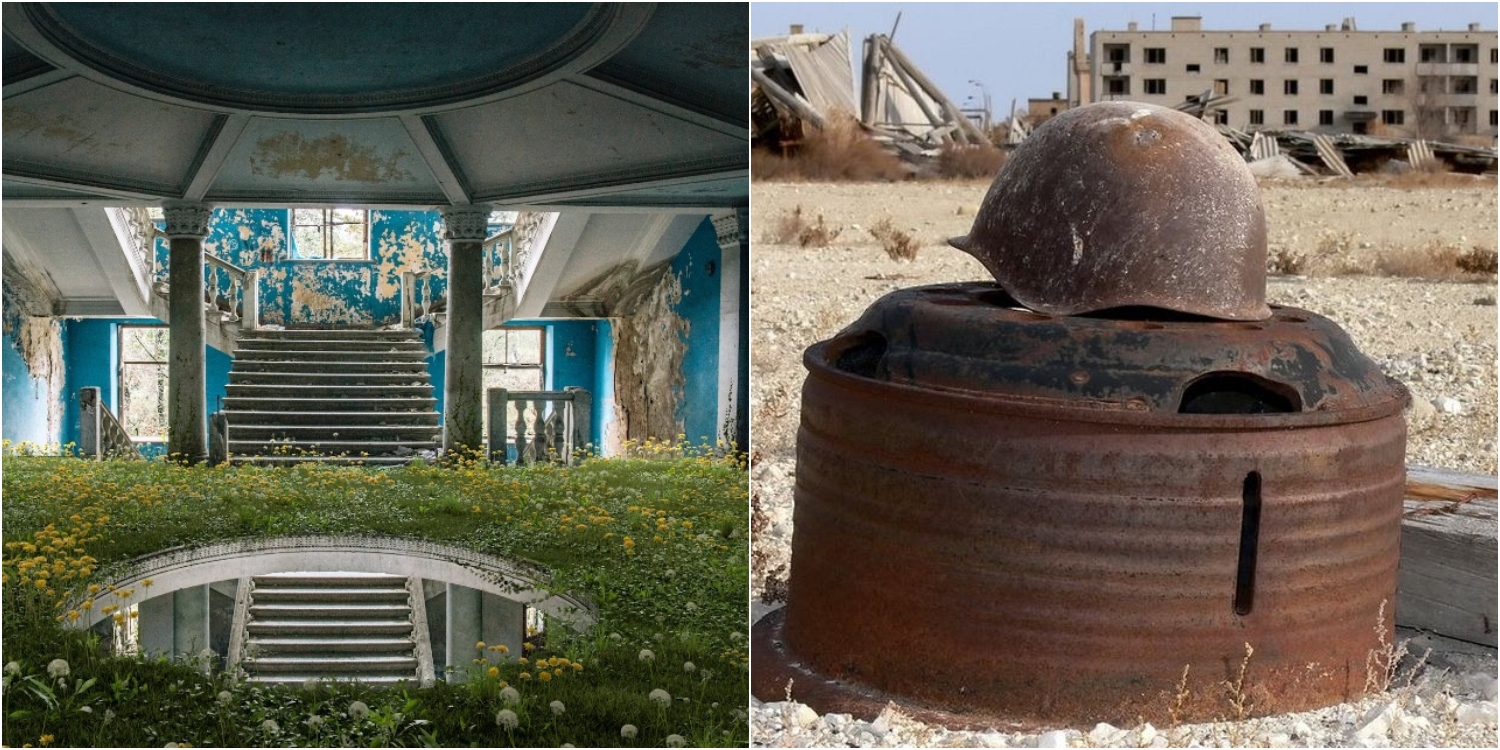 The city of Kadykchan, located in the Magadan region of Russia, was founded in the 1940s. After important coal mines were discovered in the area, Kadykchan became an important settlement with a large number of workers. By the end of the 1970s, the city’s population exceeded 100,000.

However, with the collapse of the Soviet Union, the city was abandoned. In the mid-1990s, only 300 people lived in the city. Since the early 2000s, the number of people living in the region has declined further, and Kadykchan, one of the important industrial centers of that period, has turned into an eerie ghost town with destroyed Soviet buildings and deserted squares.

Skrunda-1 village was built in 1963 in Latvia. The area, conceived as one of the important structures of the Soviet defense line, also included military installations, air and ground defense systems, bunkers, tunnels, factories and schools.

At a time when the area was the most densely populated, 5,000 Soviet soldiers and 1,000 civilians could live here at the same time. But immediately after the collapse of the Soviet Union, the Skrunda-1 area was also abandoned. Thus, Skrunda-1 took its place among the ghost towns that arose after the Soviet regime.

Neftegorsk was one of the cities that underwent significant changes with the collapse of the Soviet Union. But it was the 1995 earthquake that turned the city into a ghost town. Almost all the buildings in the city were destroyed as a result of a natural disaster, which is among the largest earthquakes in the history of modern Russia. On the other hand, more than half of the inhabitants of the city died because of this terrible earthquake. When the survivors left the area, the city of Neftegorsk turned into a deserted area.

In fact, it is not entirely correct to describe the city of Mologu as a ghost town. Because there is no such city today! In 1935, the Soviet Union decided to build a hydroelectric power station in the area. More than 130 thousand people living in the city were evacuated, more than 300 people died due to flooding in the city.

Finally, by 1941 the city was completely flooded and destroyed! Today, the ruins of the city can be found in some periods when the water in the region receded.

Wünsdorf was a large military complex built by the Nazis near the German capital of Berlin. II. After World War II, the region came under the control of the Soviet Union. The Soviet Union brought its troops into the region. However, over time, this military facility has turned into a city with schools, hospitals, entertainment venues and apartments. It was even called “Little Moscow”, because trains ran daily from this city to Moscow …

Until 1991, over 60,000 people lived at the site. However, the collapse of the Soviet Union caused great chaos in this region as well. The Soviet soldiers left the object. Many of the buildings in the area have been swallowed up by the forest! Little Moscow has turned into a big ghost town…

The city of Irbene in Latvia was one of the cities built for the soldiers of the Soviet Union. At the same time, more than 50 thousand soldiers could live in the city. However, Soviet military intelligence units were stationed in the city. These troops worked with huge satellites to listen to and receive information from friendly and enemy countries. The city was completely abandoned in 1993. Moreover, all Soviet equipment and huge satellites remained in the city as it is …

Klomino, a small village in Poland, was captured by the Soviet Union in 1945. In a short time, the region turned into a city where thousands of people could live. However, the end of the Soviet Union brought an end to this city of many thousands. Today, the city of Klomino is empty Soviet buildings and a few permanent residents in the area.

Vozrozhdenie Island, located in the region between Kazakhstan and Uzbekistan, was used by the Soviet Union as a top-secret facility for experiments with chemical and biological weapons. However, it was abandoned after the dissolution of the union. Today, the abandoned buildings in the area continue to be a chilling sight.

Tskaltubo in Georgia was once one of the favorite settlements of the ruling class in the Soviet Union. Because of the hotels, baths and health centers in this city, Soviet leader Joseph Stalin often visited this city. However, like other Soviet settlements on our list, the city of Tskhaltubo became a ghost town with the collapse of the union…